Results of the 55th year of the Concertino Praga

The double finale of the 55th year of the Concertino Praga competition took place during this year’s Dvořák Prague festival. The chamber ensembles competed before an international jury at the Convent of Saint Agnes of Bohemia on Friday 17 September. The winners were Duo Mráček–Pěruška consisting of Kristian Mráček (violin) and David Pěruška (violoncello), who played a piece by Zoltán Kodály. Both young performers also received the Audience Prize.

The jury chose the winning soloist in a packed Dvořák Hall at the Rudolfinum on Saturday 18 September. “The competition was also great this year and the final rankings were very close, but in the end the jury was most impressed by the 14-year-old Slovak pianist Ryan Martin Bradshaw, who performed Tchaikovsky’s B minor piano concerto. The Audience Prize went to the Czech pianist Jan Schulmeister,” said Jan Simon, the intendant at the Academy of Classical Music. 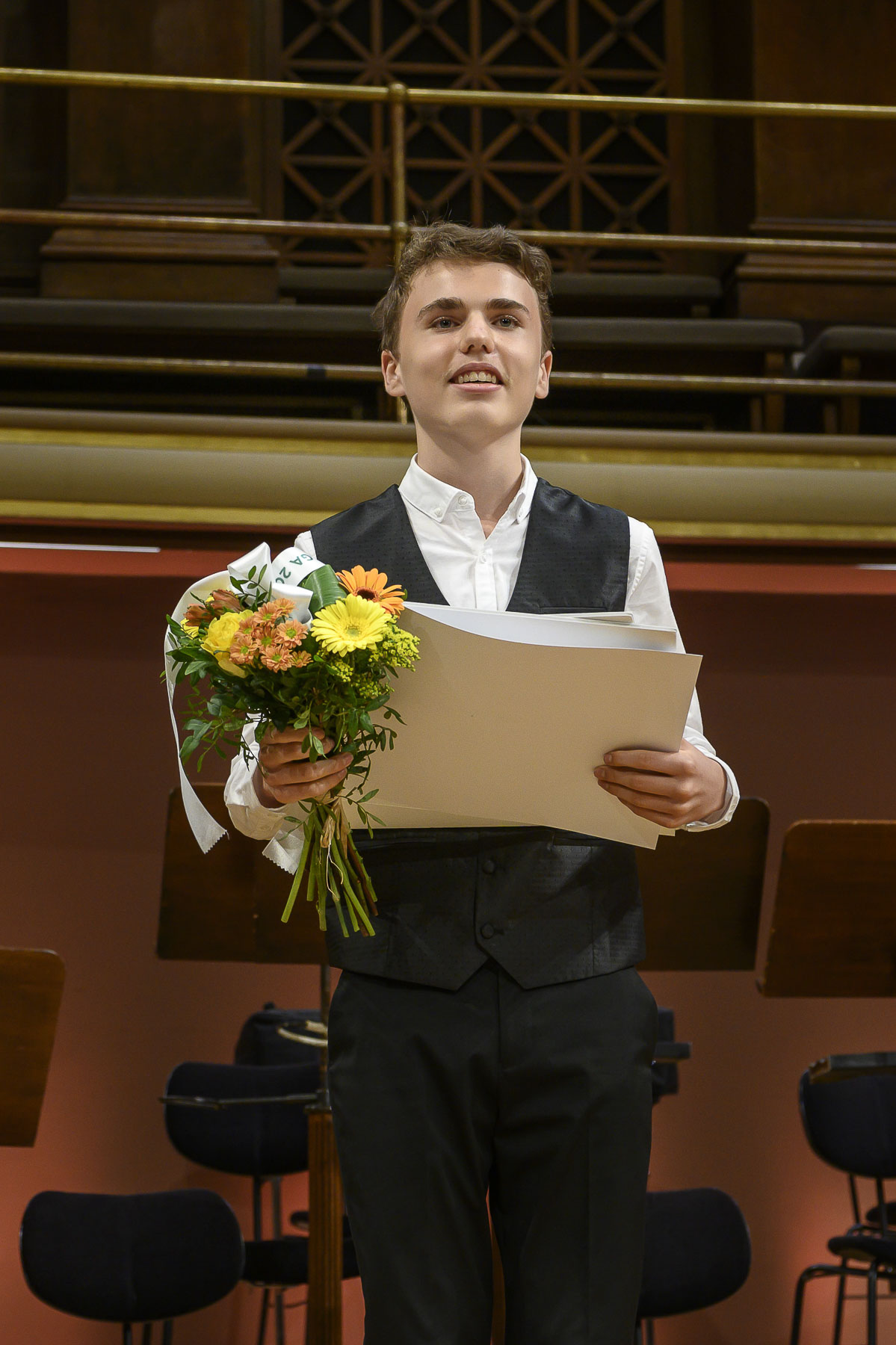 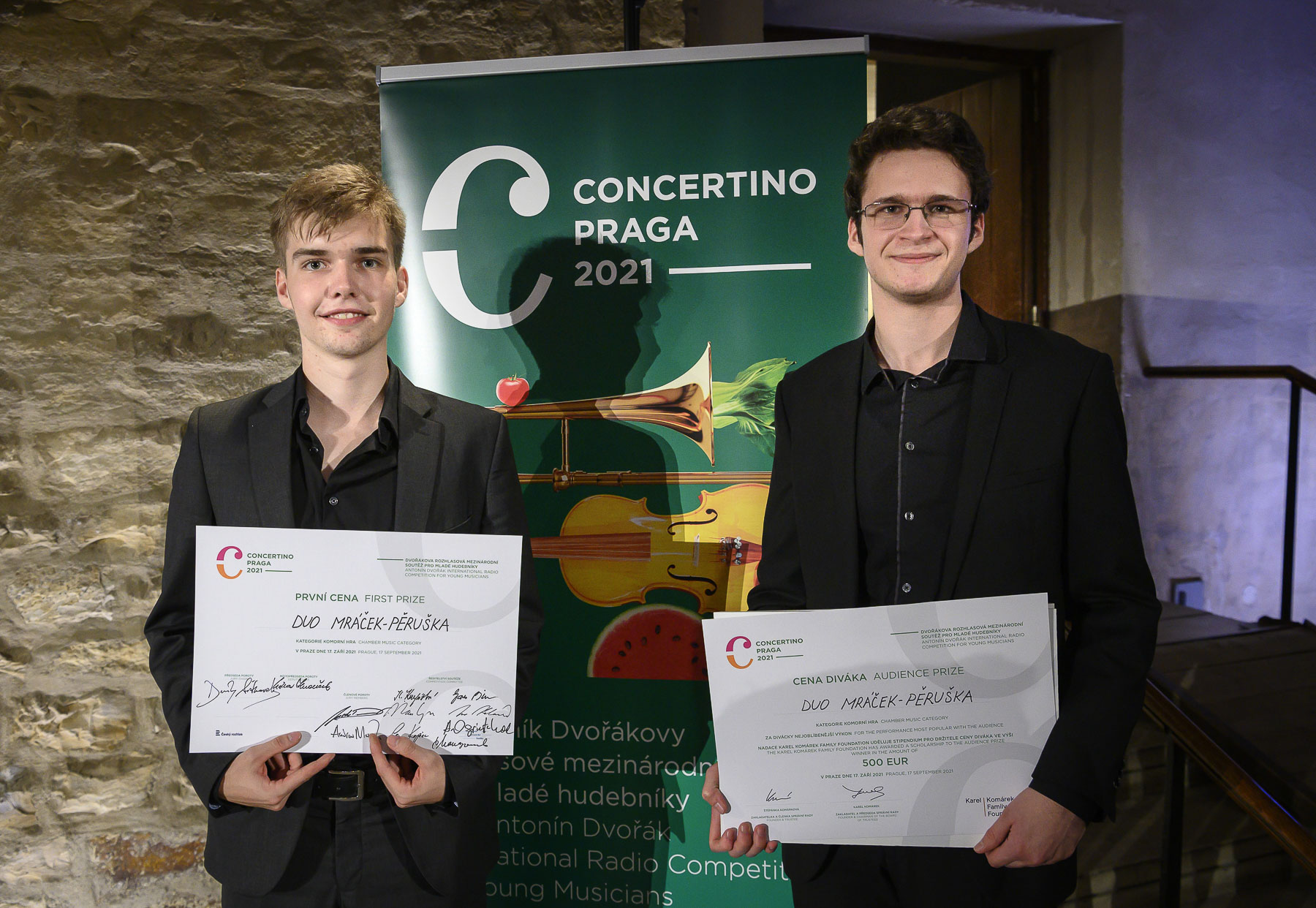 Concertino Praga – the Antonín Dvořák International Radio Competition for Young Musicians – has been held each year since 1966. The mission of this multidisciplinary competition is to find extraordinary talents up to age 15 or 16. It is jointly organised by the Academy of Classical Music and Czech Radio. Candidates in two categories – solo and chamber music – are judged by an international jury of experts. In the first round, the jury evaluates the candidates anonymously on the basis of submitted recordings. The finals are held in public as a concert of the Dvořák Prague International Music Festival. In 2021, the competition is open to contestants in both categories. The solo category will be held for violin, cello, piano, harpsichord, harp, accordion, guitar, flute, oboe, clarinet, saxophone, bassoon, French horn, trumpet, and trombone. The chamber music category is open to ensembles ranging from duos to sextets.

The winners will receive a scholarship in the amount of up to EUR 5,000. Laureates will also have the opportunity to make a professional radio recording at Czech Radio and to appear at the South Bohemia Festival Concertino Praga.

Since 1988, Concertino Praga has been a member of the European Union of Music Competitions for Youth (EMCY). It is held under the auspices of the European Broadcasting Union (EBU), of which Czech Radio became an active member in 1993.

Czech Television has completed a documentary on the Concertino Praga international competition in co-production with the Academy of Classical Music. The documentary follows the four finalists in the competition from spring when they learnt of their progression into the final and depicts their preparations, including the final competition performances at the Rudolfinum in September 2020. It is possible to watch the documentary with English subtitles on YouTube channel of the Dvořák Prague Festival.

In 2020 for the first time, Czech Radio and the Academy of Classical Music, the organiser of the Dvořák Prague International Music Festival, jointly presented the 54th annual Concertino Praga Competition. To hear a recording of the concert held as the competition finals, see below.

The competition jury of the 55th year consists of leading instrumental soloists, conductors, music teachers, and representatives of the European Broadcasting Union. The jury members for the 1st and 2nd rounds (in case of the solo performance category) will not have any information about the competitors, and the voting is secret and entirely anonymous. The final third round is public in the form of a concert that is an official part of the programme of the Dvořák Prague International Music Festival. The results will be announced immediately after the completion of the programme.

Jury for the 1st round

Jury for the 2nd round

Jury for the 3rd round

Concertino Praga – the Antonín Dvořák International Radio Competition for Young Musicians – was founded in 1966 at the initiative of the Czechoslovak Radio editorial staff for broadcasting for children and young people. Among the leading figures in the initial development of the idea of a radio competition were the harpsichordist Zuzana Růžičková, the composer Viktor Kalabis, and the radio editor Helena Karásková. Thanks to the existence of the Organisation Internationale de la Radiodiffusion et Télévision, a former east-European institution that facilitated cooperation between radio and television stations, the competition was able to attain an international character and thus to differentiate itself from a large number of established national competitions for performing musicians.

In view of the complications associated with organising international activities under the former political regime, the decision was made to hold a competition without the direct participation of the competitors by only using submitted audio recordings. It was not until the concert that the winners were invited to appear together on one stage for the first time in history in the Dvořák Hall at the House of Artists in Prague on 18 November 1966, where the violinists Václav Hudeček (2nd prize) and Dmitry Sitkovetsky (1st prize) were among the now familiar artists presenting themselves.

The following year, Václav Hudeček won first prize, and among the pianists to win prizes were Dina Joffe and Zoltán Kocsis. Despite the competition’s necessarily strong orientation towards eastern Europe, among the laureates at the turn of the 1960s and ’70s were the Israeli violinist Yuval Yaron, a string quartet from West Germany (with Ulrike Fleming, Assunta Kwoka, Brigitte Schmeid, and Doris Laidler), a Japanese piano duo with Shizuka Ishikawa and Mariko Horie, and the Canadian pianists Louis Lortie and Jon Kimura Parker. Still today, there is an apparent tradition of candidates from eastern Europe – each year, Russian competitors usually represent the most numerous foreign nationality at Concertino.

While the competition was initially open to just three categories (piano, violin, and chamber music), the number of instruments gradually grew. For this reason, among the laureates were not only the violinists Sergei Stadler, Julian Rachlin, Isabelle Faust, and Jan Mráček and the pianists Vladimír Felcman, Igor Ardašev, and Ivo Kahánek, but also the cellists Leonid Gorochov, Alexander Rudin, and Tomáš Jamník, the organist Jaroslav Tůma, the flautist Michael Martin Kofler, the oboists Jana Brožková and Vilém Veverka, the clarinettists Sabine Meyer and Ludmila Peterková, the French horn player Radek Baborák, and the trumpet player Giuliano Sommerhalder.

The multidisciplinary and international character of Concertino Praga has been strengthened thanks to the establishment of cooperation between Czech Radio and the Academy of Classical Music in 2019. This has brought together the potential of the large media company that founded the competition and has been leading it successfully for more than 50 years, and of an institution that has been presenting the internationally recognised Dvořák Prague Festival for twelve years. The support for exceptionally talented young artists was thus able to take on a new form, and the 54th annual Concertino Praga competition gained the subtitle Antonín Dvořák International Radio Competition for Young Musicians. Dvořák’s legacy is reflected in the fact that the composer himself gave financial support to promising young artists. Successful contestants therefore receive scholarships or a contribution towards the purchase of their own instrument thanks to major support from the Karel Komárek Family Foundation and other partners.