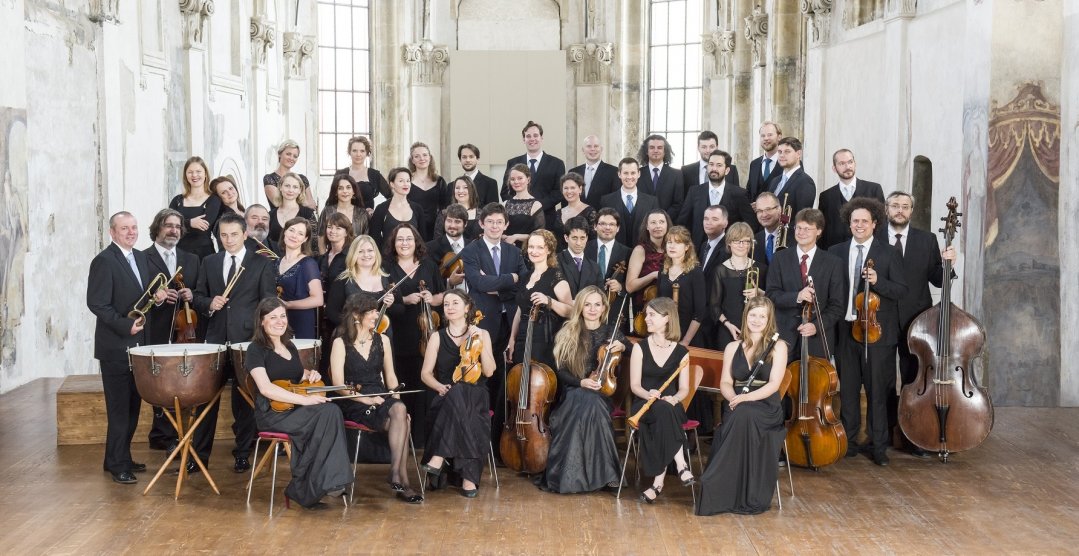 Into his Missa solemnis, Beethoven encoded a highly personal approach to the Christian liturgy, and at the same time he concentrated into it his compositional mastery at its finest. One is struck not only the uniqueness of the work itself, but also by the remarkable contradiction between the composer’s confidence and artistic ego on the one hand, and his humility before higher authority on the other. The result is a composition that is inappropriate for liturgical performance but that communicates its deep meaning wherever it is heard. Collegium 1704 and the conductor Václav Luks are among the most capable performers who could take on such a task. Beethoven was neither the first nor the last to create an extraordinary work of this type – the B Minor Mass by Johann Sebastian Bach and the Glagolitic Mass by Leoš Janáček are creative acts of a similar kind. Their performances are always a special event and a great testimony to the relationship of genius to the world’s divine order. In the Missa solemnis, it is as if Beethoven has immersed himself deeply into time and into music itself, partially forgetting his own style and evoking the artistry of the old Flemish masters of polyphony. Beethoven composed his Missa solemnis from 1819 until 1823 and dedicated it to Archduke Rudolph, Archbishop of Olomouc at the time.

In an international context, Collegium 1704 is a top ensemble that devotes itself primary to historically informed interpretation of repertoire of the 17th and 18th centuries. The year 1704 in their name is symbolic: that was the year of the first known performance of the music of Jan Dismas Zelenka, the ensemble's emblematic composer. The Collegium receives invitations to events put on by prestigious presenters including the Salzburg Festival, the Philharmonie in Berlin, London's Wigmore Hall, the Theater an der Wien, the Concertgebouw in Amsterdam, Versailles, the Lucerne Festival, the Elbe Philharmonie in Hamburg, the festival Oude Muziek in Utrecht, and the Bachfest in Leipzig. The ensemble also takes part in opera productions on stages in this country and abroad: Mysliveček's L´Olimpiade, Handel's Rinaldo, and the modern-era world premiere of Arsilda, regina di Ponto by Antonio Vivaldi directed by David Radok. Collegium 1704 recordings have repeatedly won prizes from Diapason d'Or, CD of the Month & Editor's Choice, and nominations for CD of the Year from Gramophone Magazine. The ensemble participated in the making of the feature film Il Boemo about the life of Josef Mysliveček.

Collegium Vocale 1704 is a vocal ensemble founded by the harpsichordist and conductor Václav Luks in 2005 together with Collegium 1704 on the occasion of the then current Bach – Prague – 2005 project. One of the first major joint successes of the two ensembles was a performance of Zelenka’s Votive Mass in France. In 2008 they launched the concert series Music Bridge Prague – Dresden, which links the wealth of cultural traditions of the two cities. Collaborations with the world-famous soloists Magdalena Kožená, Vivicou Genaux, and Bejun Mehta led seamlessly in 2012 to a second Collegium 1704 concert series held in Prague at the Rudolfinum. Since autumn 2015, the two series have been merged into a single concert season taking place in parallel in Prague and Dresden. 2019 saw the launch of an independent Prague series of Collegium Vocale 1704 chamber choir concerts. That year, Collegium also issued the first complete Czech recording of Handel’s Messiah and an album titled Il giardino dei sospiri with Magdalena Kožená and selections from Baroque cantatas. Their latest recording is of an imaginary Mass by Jan Dismas Zelenka, Missa 1724.

Václav Luks graduated from the Pilsen Conservatoire and the Academy of Performing Arts in Prague, studying French horn and harpsichord. He then crowned his education with the specialised study of early music at the Schola Cantorum Basiliensis in Basel, Switzerland in the fields of historical keyboard instruments and historical performance practice. In 2005 he founded the ensembles Collegium 1704 and Collegium Vocale 1704, with which he performed Bach’s B Minor Mass that same year at the Prague Spring Festival. Since then, they have been regular guests at the festival. Václav Luks remains at the helm of both ensembles, and he has achieved extraordinary international acclaim with them. He also collaborates with other renowned ensembles including La Cetra Barockorchester Basel, the Dresdner Kammerchor, and the Nederlandse Bachvereniging. He has made a number of highly acclaimed recordings, including solo recordings, for the ACCENT, Supraphon, and Zig-Zag Territoires labels, and he is frequently invited to sit on juries for prestigious music competitions. Through his international artistic activities, he has played a major part in the renaissance of interest in the music of Jan Dismas Zelenka and Josef Mysliveček.

Soprano Simona Šaturová is from Bratislava, where she graduated from the conservatoire. She has built her outstanding reputation primarily upon the Mozart repertoire (including the roles of Donna Anna, Pamina, Konstanze, Susanna, and Despina), but she also devotes herself to Italian bel canto and the music of the Baroque and Romantic eras. She makes frequent guest appearances at such important European opera houses as the Théâtre de la Monnaie in Brussels, the Aalto-Musiktheater in Essen, the Oper Frankfurt, and the Théâtre du Châtelet in Paris. In the 2017/18 season, she made her successful debut at the prestigious Semperoper in Dresden. She also dedicates herself intensively to the concert repertoire, with performances the Salzburg Festival, New York’s Carnegie Hall, and the Elbphilharmonie in Hamburg. Her discography includes works by Mozart, Haydn, and Mysliveček as well as music of the twentieth century. Her most recent CD recordings include a noteworthy 2018 release of Dvořák’s Moravian Duets using the composer’s own piano for the accompaniment.

The mezzo-soprano Václava Krejčí Housková is a graduate of the České Budějovice Conservatoire and of the Academy of Performing Arts in Prague. She won her first engagement in 2010 at the Moravian Theatre in Olomouc, where she sang a number of major roles of the worldwide operatic repertoire including Dorabella in Così fan tutte, the title role of Bizet’s Carmen, and Olga in Tchaikovsky’s Eugene Onegin. Since 2015 she has been a soloist with the National Theatre in Brno, where she also appears as Carmen and as the Witch in Dvořák’s Rusalka, Abigail in Verdi’s Nabucco, and Isoliera in Rossini’s Le comte Ory. In 2014 for her performance of the role of Smeton in Donizetti’s opera Anna Bolena, she was among the candidates nominated for a Thalia Award. She made her debut at Prague’s National Theatre in 2014 in the title role of Bizet’s Carmen. She collaborates with leading Czech orchestras including the Czech Philharmonic, the Pilsen Philharmonic, and the Czech Chamber Philharmonic Orchestra in Pardubice. She is a guest of prestigious festivals at home and abroad including the Wexford Festival Opera, Prague Spring, Smetana’s Litomyšl, Prague Proms etc.

One of the most sought-after Czech tenors of the present time, regular soloist with Prague’s National Theatre Jaroslav Březina is a graduate of the Prague Conservatoire and studied privately with the legendary Václav Zítek. He performs in both operas and concerts. On Czech and foreign operatic stages he has created an overwhelming number of roles, of which we may mention among the most important only Don Ottavio in Don Giovanni, Tito in La clemenza di Tito, Tamino in The Magic Flute, Count Almaviva in The Barber of Seville, El Dancaïro in Carmen, Alfredo in La traviata, both Vašek and Jeník in The Bartered Bride, Michálek in The Devil’s Wall, Jiří in The Jacobin, Jirka in The Devil and Kate, Laca in Jenůfa, and Nemorino in The Elixir of Love. Of his concert repertoire let us name at least Janáček’s The Diary of One Who Vanished, which he has performed for instance in Madrid’s Teatro Real. He has numerous internationally-acclaimed recordings to his credit, such as Zelenka’s coronation opera Sub olea pacis et palma virtutis which won a prestigious prize in Cannes Classical Awards for 2002. He holds a Thalia Prize for 2015.

The bass Jan Šťáva is one of the greatest discoveries on the Czech opera scene in recent years. A graduate of the Janáček Academy of Performing Arts, he has been a member of the opera ensemble of the National Theatre in Brno since 2010, and a year later he made his debut at the National Theatre in Prague. His repertoire encompasses key roles of the Czech and worldwide literature, including Méphistophélès (Faust), Leporello (Don Giovanni), Gremin (Eugene Onegin), Basilio (The Barber of Seville), Kecal (The Bartered Bride), Osmin (Abduction from the Seraglio), Figaro and Bartolo (The Marriage of Figaro), Sarastro (The Magic Flute), and Sparafucile (Rigoletto). He is a guest on stages abroad (including L’Opéra de Paris) and at music festivals (BBC Proms, Salzburger Festspiele, Prague Spring). He collaborates with major orchestras (BBC Symphony Orchestra, Beethoven Orchestra Bonn, Czech Philharmonic). His concert repertoire includes bass parts in the works of Bach (Christmas Oratorio, St John Passion), Haydn (The Creation), Mozart, Dvořák, and Verdi (Requiem).