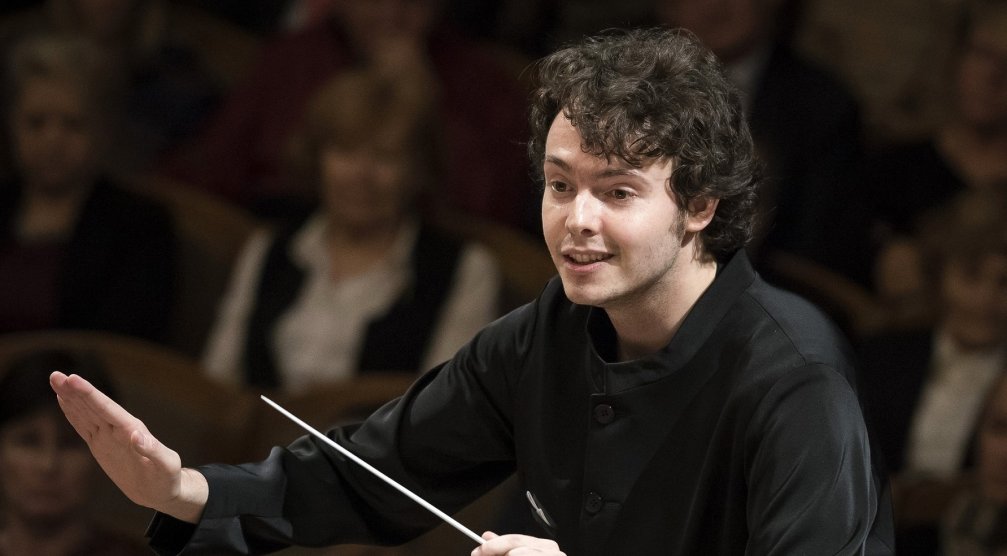 In 2020 for the first time, Czech Radio and the Academy of Classical Music, the organiser of the Dvořák Prague International Music Festival, jointly presented the 54th annual Concertino Praga Competition. To hear a recording of the concert held as the competition finals, see HERE.

This year for the first time, the final round of the competition Concertino Praga gained the exciting atmosphere of direct confrontation. The four young soloists Daniel Matejča, Aleksandr Rublev, Jan Schulmeister, and Vsevolod Zavidov had to prove themselves not only before the public, but also before a jury of first-class musicians. Besides the first winners from 1966 and 1967 Dmitry Sitkovetsky and Václav Hudeček, the jury members were Jakub Hrůša, Walter Auer, Ivo Kahánek, Daniel Ottensamer, Lukáš Vondráček, Francois Leleux, Jana Boušková, David Mareček, and Marek Zvolánek.

We wish to thank Czech Radio for their cooperation and for providing an audiovisual recording. Already now, we are looking forward to the 55th annual competition, with contestants in categories for soloists and for chamber music.

For more information about the competition, go to akademieklasickehudby.cz/concertinopraga.

The violinist Daniel Matejča studied the violin at the Jabloňová Arts Primary School in Liberec and he is currently studying under Professor Ivan Štraus at the Music and Dance Faculty of the Academy of Performing Arts in Prague. He has also completed a number of workshops organised by the Czech Philharmonic. He is, amongst other things, an absolute winner of the National Arts Primary School Competition, a winner of the main round of the German national Jugend musiziert competition and a winner and laureate of the Josef Muzika Competition and the Josef Micka Competition. In 2016 and 2018, he was the most successful Czech representative at the prestigious Kocian Violin Competition and in 2019 he was the competition’s absolute winner and laureate. The competition’s patron, Pavel Šporcl, invited him to perform at a joint full-length concert on the basis of these successes. At the age of fourteen, he performed as the soloist in the Mendelssohn Violin Concerto accompanied by the F. X. Šalda Theatre Orchestra in Liberec. He is also an excellent percussionist.

Aleksandr Rublev was born in Moscow on 18.11.2005. He started playing the trumpet at the age of five and is currently studying under Professor Vladimir Pushkarev at the Gnessin Music School. He holds scholarships from the Vladimir Spivakov International Charity Foundation and the New Names Foundation. Some of Aleksandr’s music awards include the Grand Prix from the II Paris International Internet Music Competition and the VIII Music Competition in Serbia (2017), the 3rd prizes from the X Mravinsky Competition in Saint-Petersburg, Classic Pure Vienna and the XIX Nutcracker TV competition in Moscow (2018), a gold medal from the Vienna International Music Competition and the Best Trumpeter prize from the 5th Positively Brass Solo Competition held in Trossingen, Germany (2019). Aleksandr has also taken part in music festivals in Amsterdam (2015), Iguazu en Concierto in Argentina, the Cap Ferret Music Festival in France (2017), the 19th Italian Brass Week (2018), Maspalomas in Spain and the AlpenKlassik in Germany (2019). He is a member and soloist of the Yuri Bashmet Youth Symphony Orchestra. In 2019, he performed with the Orchestra da Camera Fiorentina under Giuseppe Lanzetta.

Jan Schulmeister has been playing the piano since the age of five. In addition to studying in Eva Zonová’s class at the Arts Primary School in Kroměříž, he has also completed a number of master classes with leading teachers and artists both at home and abroad. He has received the most prestigious prizes from many piano competitions, including being the two-time winner of the National Arts Primary School competition, the two-time absolute winner of the Piano Talents competition in Milan and the recipient of the absolute winner’s title in the Amadeus and Beethoven’s Teplice competitions. He has also added victories at the César Franck Competition in Brussels and at the Estonian Odin International Music Competition. He became a finalist in the 2020 Concertino Praga competition and received the EMCY Prize. He performs with leading Czech orchestras under the batons of Tomáš Netopil, Dennis Russell Davies or Jiří Rožeň and he cooperates with the Wihan Quartet. He plays regular solo concerts at both Czech and international concert halls and he participates at international music festivals such as the Prague Spring, Dvořák Prague, Smetana’s Litomyšl, Svátky hudby or the South Bohemian Festival.

Vsevolod Zavidov was born in Moscow in 2005. He started playing the piano under Tamara Koloss at the Central Music School at the age of four. In 2018, he moved to the Gnessin Music School to study under Professor Tatiana Zelikman. Vsevolod debuted in the Great Hall of the Moscow Conservatory when aged eight. He has also performed in its Minor and Rachmaninov Halls, at the Moscow International Performing Arts Centre and in various cities around Russia. In 2016, he won the 1st prize in the Debut International Piano Competition in New York, the USA and he played a recital at the Weill Recital Hall in Carnegie Hall. In 2017, he performed Shostakovich’ Piano Concerto no. 1 with the Moscow Virtuosi Chamber Orchestra under the baton of Vladimir Spivakov. In 2018, Vsevolod performed at the Chetham School of Music in Manchester, England, at the Prayner Conservatory of Music and Dramatic Arts in Vienna, Austria and as a guest artist at the Golden Key Music Festival. He won the Grand Prix at the Drozdoff Society’s 2018 Impromptu! Audition and played five recitals in the states of New York, Connecticut and New Jersey in 2019.

The Prague Radio Symphony Orchestra is one of the most important and oldest orchestras in the Czech Republic. For many decades, it has been a versatile orchestra with a broad repertoire of concert music and opera. Among the permanent and guest conductors to work with the orchestra have been Václav Talich, Karel Ančerl, Václav Neumann, Vladimír Válek, and Charles Mackerras. Its present chief conductor is Alexander Liebreich. A number of composers from around the world have performed their own works width the orchestra, including Sergei Prokofiev and Aram Khachaturian. The orchestra has always been heavily involved with recording activity, and it has to its credit the making of recordings of many Czech classics that are not a usual part of the repertoire. This is not its first appearance at the Dvořák Prague Festival: in 2014, for example, it took part in the world premiere complete concert performance of Dvořák’s first opera Alfred with its original German libretto, and in 2019 it gave a unique performance of Dvořák’s first musical setting of the libretto King and Collier in a modern-era premiere.

Jiří Rožeň, who turns 29 this year, is one of the biggest discoveries among the young generation of conductors. He studied conducting at several different schools in Prague, Salzburg, Hamburg, Zurich, and Glasgow, and he has taken part in masterclasses led by such figures as Daniele Gatti, Bernard Haitink, and David Zinman. His greatest successes so far include participation in the finals of the conducting competition in Salzburg and the post of assistant conductor of hte BBC Scottish Symphony Orchestra, where was working alongside Donald Runnicles and Thomas Dausgaard. He collaborates with the Czech Philharmonic, with which he has also recorded Kalon by the contemporary British composer Richard Blackford. Among the orchestras with which he has so far appeared are the Deutsches Sinfonie-Orchester Berlin, the BBC Philharmonic, the Ulster Orchestra, Camerata Salzburg, the Czech Chamber Philharmonic Orchestra in Pardubice, and the Brno Philharmonic. He is a great promoter of Czech music: besides works of the classical repertoire, he also performs works by the twentieth-century composers Viktor Kalabis and Miroslav Kabeláč, whose Symphony No. 4 he gave its Austrian premiere at the Salzburg Festival.